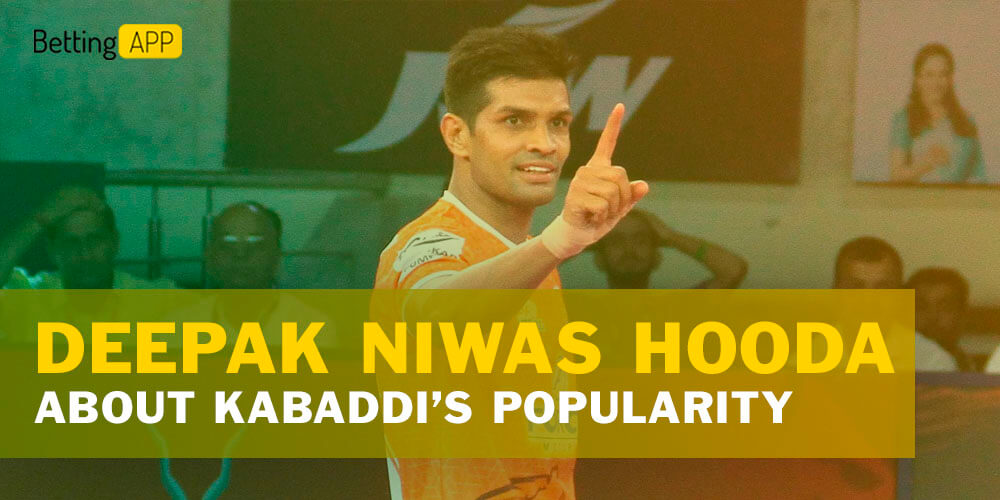 During the interview with the captain of India National Kabaddi team, Deepak Niwas Hooda, on Sports Tiger’s show ‘Building Bridge’ were discussed the topics of leading the National team, coping with the pandemic, and his journey from a village in Rohtak to a pro league player. Keep reading to know more ahead.

His journey wasn’t an easy one, he had to take on many responsibilities since early childhood. At the age of 4 his mother died, some time afterward, when Deepak was in class 12 his father passed away. At that time he had a married elder sister who had to bring up two children in the parent’s house due to some family problems. It was very hard to concentrate on studies for Niwas in those days.

Deepak Niwas Hooda started to earn money teaching in a private school to carry out household finances. At the same time, he was very passionate about playing kabaddi and practiced it every day. The player’s day started with a practice till 6 – 6.30 am in the morning hours, after that he went to school to conduct lessons. At 2 – 2.30 pm he came back to his home and continued training till 7.30 – 8 am at night. That was an everyday routine for the professional player.

Years 2014 and 2016 became significant for Deepak Niwas Hooda. In January 2014 in Patna, he played so well that could never repeat such a performance in his career. Later on, in 2016, he debuted at the national level and played The World Cup and The South Asian Games in the same year. Deepak, who had already had an Arjuna Award, undoubtedly was the one who led his team to a gold medal at the 2019 South Asian Games.

The moment when he has been chosen as a captain of the India National Kabaddi Deepak calls the moment when a dream came true. He’s made much effort to work on his skills and played passionately kabaddi since childhood.

“During the start of COVID-19, there were a few problems but we managed”, smiled Niwas.

Being a contact sport made kabaddi a target for serious restrictions during the pandemy. The lockdown prevented players from playing kabaddi, roaming around their houses in search of other things to do. Niwas was also the one suffering from the restrictions, so once a possibility appeared he was extremely happy.

Playing in the position of skipper in the Jaipur Pink Panthers in the Pro Kabaddi League Deepak sees how each day more and more people become interested in kabaddi. He’s sure that the Pro Kabaddi League is successful in attracting people to the sport, making kabaddi the second most-watched game in the country.

“Earlier International tournaments like the Asian Games and the World cup used to take place but very few followed the game. People follow what is seen on TV.”, said Deepak Niwas Hooda.